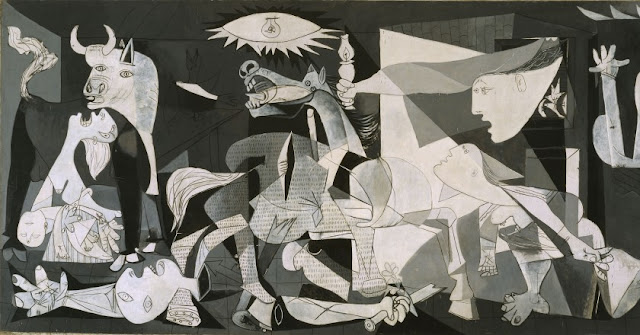 In April of 1937, Adolph Hitler bombed the civilian population of Guernica, a tiny Basque village in northern Spain. This first-ever aerial bombardment of a civilian population center was viewed by the Nazis as bombing practice for the Luftwaffe, and was done on behalf of Spain's soon-to-be fascist dictator, Generalissimo Francisco Franco. Sixteen hundred people died as the high-explosives and incendiary bombs smashed all around. In the cold and silent mountains, Guernica burned for three days and nights.

When news of the bombings reached Paris, the city exploded in protest. Millions took to the streets in the biggest May Day marches in the history of the city. Pablo Picasso, that least political of modern artists, saw a newspaper featuring stark black and white photographs of the horrific devastation in his homeland, and was immediately seized with inspiration. He returned to his studio and began working on what would eventually turn out to be one of his greatest masterpieces. He entitled it, simply: Guernica 1937.

In 1985, Nelson Rockefeller donated a reproduction of this magnificent painting to the United Nations building in New York City. Ever since, it has hung at the entrance of the Security Council, serving as a stark reminder of the kind of horror the United Nations was created to help prevent.

On January 27 of 2003, in an event eerily reminiscent of Attorney General John Ashcroft's covering up the bare-breasted statue of Lady Justice, United Nations staff hid the reproduction of Guernica behind a large blue curtain… and with good reason. You see, when members of the Security Council address the press after a meeting, Guernica hangs prominently in the background. And it was on this day in 2003 that Secretary of State Colin Powell went in front of the global community to lie his fucking ass off. And the last thing he needed while trying to make a case for launching a preemptive attack against Iraq - starting with a devastating "shock and awe" onslaught of up to 800 cruise missiles launched straight into the heart of Baghdad - was that damning canvas looming behind him like some grim specter of the unimaginable horrors he, and the administration he represented, seemed so desperate to unleash upon the world.

On this day in 1852, the Hermitage Museum in Saint Petersburg, Russia, one of the largest and oldest museums in the world, opens to the public. In 2002, the remarkable film Russian Ark features this remarkable building in a single, remarkable, 2-hour "take".

On this day in 1869, the largest alluvial gold nugget in history, called the Welcome Stranger, is found in Moliagul, Victoria, Australia.

On this day in 1885, evil scumbag King Leopold II of Belgium establishes the Congo as a personal possession. A lot of very evil "firsts" happen there under his watch. This guy belongs on the same list as Hitler, Stalin and Mao.

On this day in 1901, inventor Ed Prescott patents the centrifugal roller coaster, which is capable of sending thrill-seekers into a full-fledged upside-down loop-de-loop. Subsequent patents filed by Ed Prescott include the Barf Bag, the Puke Bib, and the Vomit Goggles.

On this day in 1909, Belgian chemist Leo Baekeland announces the creation of Bakelite, the world's first synthetic plastic.

On this day in 1918, American pilot Stephen W. Thompson shoots down a German airplane in the very first aerial "dogfight" victory by the U.S. military.

On this day in 1918, the USSR officially begins separating church and state. Church nearly succumbs to post-operative complications.

On this day in 1919, Hollywood titans Charlie Chaplin, Mary Pickford, Douglas Fairbanks, and D.W. Griffith launch United Artists. It lasts until the late 70's, when Michael Cimino's Heaven's Gate pretty much destroys it. Tom Cruise attempted to revive it years later, but nothing doing.

On this day in 1937, President Franklin D. Roosevelt proposes a plan to enlarge the Supreme Court of the United States. It was not his proudest day.

On this day in 1939, Generalísimo Francisco Franco becomes the 68th "Caudillo de España", or Leader of Spain, a job he keeps for a very, very long time.

On this day in 1958, a hydrogen bomb is lost by the US Air Force off the coast of Savannah, Georgia, never to be recovered. Wow. I wonder who's got a hold of it now?

On this day in 1972, Bob Douglas becomes the first black man elected to Basketball's Hall of Fame. It is my considered opinion that this fact requires no further editorial manipulation to make it hilarious.

On this day in 1973, the Hagar The Horrible comic strip hits the funny pages for the first time ever, proving once and for all that Vikings aren't really all that funny. I dunno… maybe it's the whole rape, pillage and murder thing.

On this day in 1976, the swine flu outbreak begins at Fort Dix, New Jersey.

On this day in the year 1988, in the first professional wrestling match to be aired on prime-time network television in 30 years, Andre the Giant defeats Hulk Hogan. Some observers believe this event triggered the regrettable pro-wrestling renaissance which continues to thrive to this very day. Interesting aside: recent studies have shown that up to 90% of backyard wrestlers are gay, even though most have no idea.

On this day in 1989, Kareem Abdul-Jabar becomes the first NBA player to score 38,000 career points. To put that achievement in perspective, that's almost four points for every chick Wilt Chamberlain ever banged.