An astonishingly frank article in the New York Times dated June 29, 2014 tells those of us who've been paying attention something we've known for just about a decade, now. It begins:

Just weeks before Blackwater guards fatally shot 17 civilians at Baghdad’s Nisour Square in 2007, the State Department began investigating the security contractor’s operations in Iraq. But the inquiry was abandoned after Blackwater’s top manager there issued a threat: “that he could kill” the government’s chief investigator and “no one could or would do anything about it as we were in Iraq,” according to department reports.

American Embassy officials in Baghdad sided with Blackwater rather than the State Department investigators as a dispute over the probe escalated in August 2007, the previously undisclosed documents show. The officials told the investigators that they had disrupted the embassy’s relationship with the security contractor and ordered them to leave the country, according to the reports.

After returning to Washington, the chief investigator wrote a scathing report to State Department officials documenting misconduct by Blackwater employees and warning that lax oversight of the company, which had a contract worth more than $1 billion to protect American diplomats, had created “an environment full of liability and negligence.”

You can continue reading the article here.
Posted by Jerky LeBoeuf at 12:03 AM No comments:

So, you Canadians think you're lucky ducks, living in the free-est land in all of Freedomworld, do you? This post at the #cdnpoli tumblr has a little something to share with you...

The Toronto G20 Summit of June 26-27, 2010, hosted by Stephen Harper, was an incredibly expensive undertaking that resulted in massive human rights violations against members of the public at the hands of the police. Despite this, politicians refuse to call a full public inquiry and hold police—as well as themselves—to account … something to think about on the 4th anniversary of the Toronto G20, and as we approach this year’s Canada Day celebrations.

1. Over half a billion dollars was spent on security for the three-day G8/G20 summit.

It gets worse, and more disturbing, as the list goes on. Augmented with plenty of video and other documentary evidence. This is one you're gonna want to clip and save.
Posted by Jerky LeBoeuf at 9:31 PM No comments:

THE TROUBLE WITH DEMONS

Many people think that in order for a person to be moral, they have to be a religious believer. More broadly, many believe that secular cultures are inherently immoral, un-anchored from any system that could provide an ethical underpinning necessary for a successful civilization.

Yer old pal Jerky believes the opposite is true; that, far from providing a bedrock foundation, the man-made and all-too-manipulable mythologies of faith are a dangerously shifting sand-dune of arbitrary absolutes and solipsistic meta-relativism.

Case in point: BTK killer/pillar-of-the-Lutheran-church Dennis Rader. In a recent interview, the ten-time serial torture-killer insisted: "I just know it's a dark side of me. It kind of controls me. I personally think it's a -- and I know it is not very Christian -- but I actually think it's a demon that's within me."

In truth, there is nothing quite so Christian as blaming one's heinous transgressions on possession by evil spirits. It's the ultimate "get out of jail free" card, which is ultimately the appeal of all religions. They absolve you of responsibility. As Rader watched his victims' families weeping on the TV news about the devastation his terrible crimes had wrought upon them, his Christian faith allowed him to tell himself: "Wow. That's one evil demon that's got itself wedged up inside me! Oh well. I'm sure God will forgive me when I meet him in the Great Hereafter. After all, I can't possibly be held responsible for what a demon does, can I?"

Of course, it's true that Rader won't be held responsible in the Great Hereafter, because THERE IS NO FUCKING GREAT HEREAFTER!!! And deep down inside, Rader knows it. They all know it; the child-molesting priests, the bombers, the hijackers, the idiots who stone rape victims to death, the high officials who launch jihads, inquisitions and fatwahs… but they refuse to face up to it. Because every religious believer is a believer of convenience. They're more afraid of personal accountability than they are of burning in an everlasting afterlife, because they know that shit is bogus.

Meanwhile, somewhere out there, another religious True Believer is stocking his car trunk with duct tape, pliers and a blowtorch at the slavering behest of his own, personal demon. God save us from those who believe in Him.
Posted by Jerky LeBoeuf at 6:05 PM No comments:

CHURCH OF SUBGENIUS ROCKED BY DISCOVERY OF PROTO-BOB!

In my daily wanderings, I ran across this blog post from mid-2012 at the Fit To Print blog of the Virginia Newspaper Project at the Library of Virginia. It seems somebody found this image in an ad in The Blue Ridge Herald from June 1956, starring the disembodied, floating head of Church of the Subgenius uberdeity J.R. Bob Dobbs. 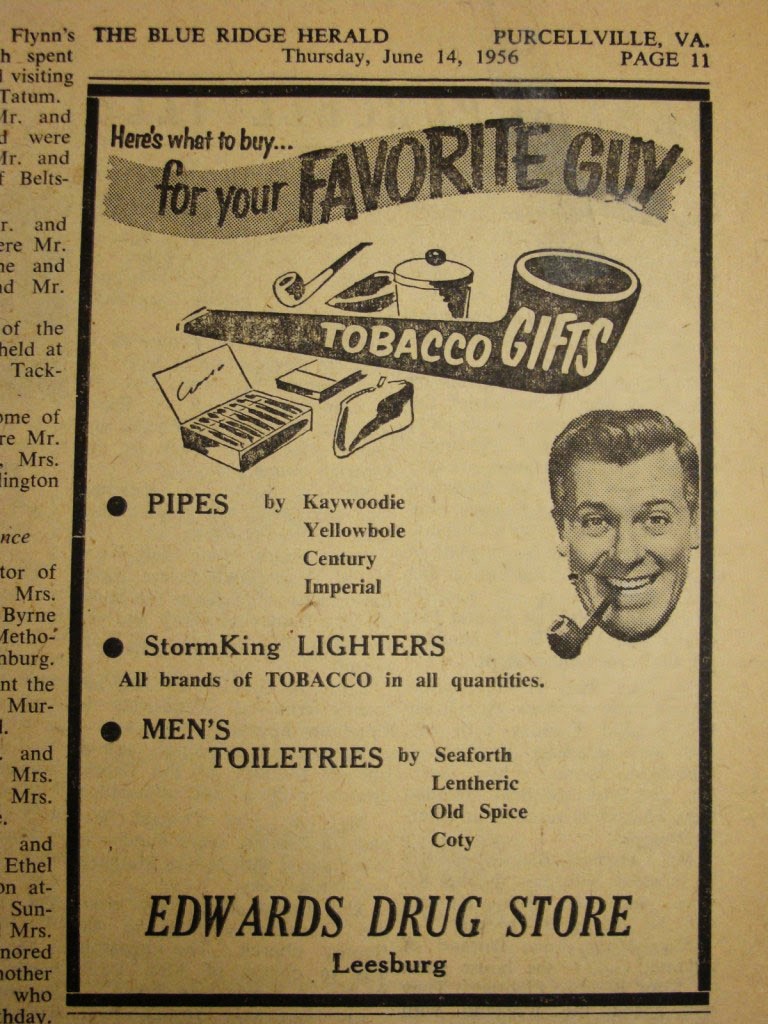 And this, a full two and a half decades prior to the Church's incorporation (and the giving of Slack, and the coming of X-Day, which was a big let-down for us all, as you no doubt recall).

Anyhoo, just thought I'd share.
Posted by Jerky LeBoeuf at 6:00 PM No comments:

London's Guardian newspaper recently ran an incredible story about an outrageous injustice that should give the willies to anyone who... well... anyone with a functioning brain, to be honest with you. I mean, just check this out...

In a plot worthy of a crime blockbuster, Gustl Mollath, 56, was submitted to the secure unit of a psychiatric hospital seven years ago after court experts diagnosed him with paranoid personality disorder following his claims that staff at the Hypo Vereinsbank (HVB) – including his wife, then an assets consultant at HVB – had been illegally smuggling large sums of money into Switzerland.

Mollath was tried in 2006 after his ex-wife accused him of causing her physical harm. He denied the charges, claiming she was trying to sully his name in the light of the evidence he allegedly had against her. He was admitted to the clinic, where he has remained against his will ever since.

But recent evidence brought to the attention of state prosecutors shows that money-laundering activities were indeed practiced over several years by members of staff at the Munich-based bank, the sixth-largest private financial institute in Germany, as detailed in an internal audit report carried out by the bank in 2003. The report, which has now been posted online, detailed illegal activities including money-laundering and aiding tax evasion. A number of employees, including Mollath's wife, were subsequently sacked following the bank's investigation.

There is only one word to adequately describe this: un-FUCKING-believable.
Posted by Jerky LeBoeuf at 10:45 PM No comments:

Okay, so watching this came close to making me cry, and I don't know why, but I'm kind of freaked out right now.
Computers Watching Movies (Exhibition Cut) from benjamin grosser on Vimeo.
Posted by Jerky LeBoeuf at 7:50 AM No comments:

So. It has finally come to this. 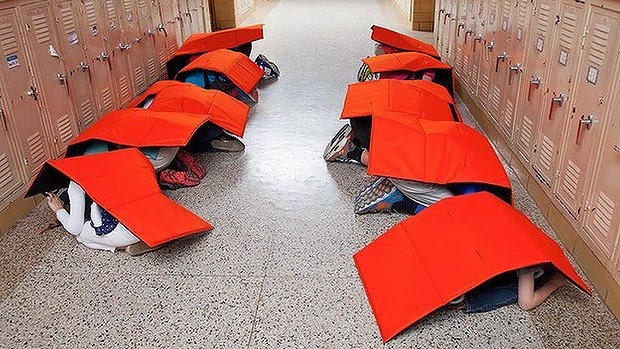 ProTecht, L.L.C., is a world-class innovator of protective products that enhance the safety of individuals while participating in many different activities and environments. ProTecht™ researched and developed the Bodyguard™ blanket in order to provide superior protection for children and teachers while at school. Bodyguard™ blanket is one of the newest and most thoroughly tested bullet and tornado projectile resistant products in the market today.

"Tornado projectiles." Who even knew that was a thing?!
Posted by Jerky LeBoeuf at 1:26 AM No comments:

A FULL MOON ON FRIDAY THE 13TH

As if poop hasn't already been splattering against propeller lately, what with all the Alex Jones worshipping "hate-riots" and "patridiots" popping off like so many cheap Chinese fireworks from sea to shining sea - and I mean that quite literally, what with Elliot "Supreme Gentleman" Rodger waging slaughter against the Beautiful People on a California beachfront while, way over on the other side of the continent, Canadian Trailer Park Boy Justin Bourque guns down five Mounties a mere hop, skip and jump from the icy North Atlantic - now we've got to worry about a whole new passel of moony-eyed loons and triskaidekaphobiacs getting in on the action? You know, I think the time is ripe for me to make like a turtle for a couple days. Somebody knock on my shell if we get through the next 24 hours without a major terrorist incident or the definitive kick-off of Cold War Part Two.

Oh, and by the way, this image is faked: This one, on the other hand, is not: Sleep well.
Posted by Jerky LeBoeuf at 12:13 AM No comments:

I think we need to come up with a word to describe the shudder of nauseous guilt you experience upon realizing that you've just been tricked into allowing yourself to be deeply moved or legitimately entertained by... an advertisement. "Shameful Joy" or schadenfreude is something quite different, as are "guilty pleasures".

Oh, and this is today's culprit, in case you were wondering...

Posted by Jerky LeBoeuf at 7:52 PM No comments:

A COMPUTER HAS PASSED THE TURING TEST FOR THE 1ST TIME

The fine folks over at GIZMODO reports...

This is big. A computer program has successfully managed to fool a bunch of researchers into thinking that it was a 13-year-old boy named Eugene Goostman. In doing so, it has become the first in the world to have successfully passed the Turing Test. The test is named after computer pioneer Alan Turing. To pass it, a computer program needs to dupe 30 percent of human judges in five-minute, text-based chats, a feat that until now had never been accomplished.

Fortunately, the program passed "just barely" according to judges.

We here at the Daily Dirt Diaspora family of blogs have been writing about our concern regarding the fast-approaching "Robotalypse" for well over a decade, so we'll definitely be keeping you posted on this front of the war, as well.

We now take you back to our regularly scheduled program of paging through the history books for crazy paracultural events to remark upon.
Posted by Jerky LeBoeuf at 5:10 AM No comments: