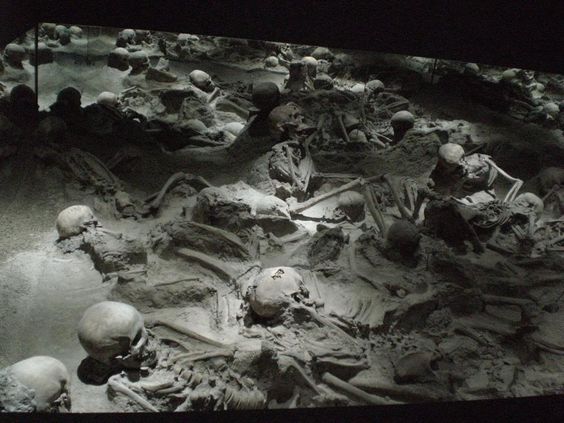 On this day in the year 79 AD, the European continent's only active volcano, Vesuvius, blows its top. Thousands die, asphyxiated by clouds of hot, poison gas, and the vibrant Roman cities of Pompeii and, less famously, Herculaneum, are buried under a thick layer of steaming mud and ash. The dead cities lay undisturbed and preserved for millennia until, in the eighteenth century, archaeological excavations began. They continue to this very day. Priceless art treasures and great, formative works of philosophy, literature and science were discovered, fueling the Enlightenment. Today, Vesuvius is still active, and scientists claim it's only a matter of time before she pops off again. Nearly a million people live in her "kill zone." Who knows? Maybe in another two thousand years they'll be digging up empty Brio bottles and copies of L'Espresso magazine and marveling at the wonder of it all.

On this day in 1305, Sir William Wallace - better known today as Braveheart - is executed for high treason at Smithfield in London.

On this day in 1572, the Saint Bartholomew's Day Massacre takes place in France when King Charles IX - acting on the wishes of his mother, Catherine de Medici - orders the assassination of French Protestant leaders, known as Hugenots, who were attending the marriage of their leader, Navarre, to the King's sister, in Paris. Once word got out the the King's men were killing Protestant leaders, Frenchmen across the nation went bonkers, massacring any Protestant they could get their hands on. Despite a royal proclamation to cease and desist, the killings went on into October, by which time nearly seventy thousand French Protestants had been slaughtered. Meanwhile, up in heaven, Jesus and God looked at each other and shook their heads in utter disbelief.

On this day in 1784, Western North Carolina (now eastern Tennessee) declares itself an independent state under the name of Franklin; it is not accepted into the United States, and only lasts for four years.

On this day in 1863, a Confederate-sympathizing, slavery-supporting reprobate by the name of William C. Quantrill leads 450 guerrila-style "raiders" in a violent attack on the city of Lawrence, Kansas. The rampaging army - which included the infamous James and Younger crime gangs - burned down most major buildings in the city, and killed over 200 men and boys.

On this day in 1927, Italian Anarchists Sacco and Vanzetti are executed after a lengthy, controversial trial.

On this day in 1939, Germany and the Soviet Union sign a non-aggression treaty, the Molotov-Ribbentrop Pact. In a secret addition to the pact, the Baltic states, Finland, Romania, and Poland are divided between the two nations. Meanwhile, three years later to the day, on this day in 1942, the Battle of Stalingrad begins after Hitler stupidly chooses to invade the USSR.

On this day in 1966, Lunar Orbiter 1 takes the first photograph of Earth from orbit around the Moon.

On this day in 1968, drummer Ringo Starr quits The Beatles over a minor disagreement. He soon comes to the terrifying realization that he's RINGO STARR, for fuck's sake, and promptly returns, tail tucked tightly between his legs, acting as though nothing had happened. Taking pity on him, John Lennon, Paul McCartney and George Harrison let it slide.

On this day in 1973 a bank robbery gone wrong in Stockholm, Sweden, turns into a hostage crisis; over the next five days the hostages begin to sympathize with their captors, leading to the term "Stockholm syndrome".

On this day in 1990, a computer genius named Tim Berners-Lee opens the WWW - World Wide Web to new users.

On this day in 1990, Armenia declares its independence from the Soviet Union.

On this day in 1993, the Galileo spacecraft discovers a moon, later named Dactyl, around 243 Ida, the first known asteroid moon.

On this day in 1996, Saudi-born terrorist Osama bin Laden issues message entitled "A declaration of war against the Americans occupying the land of the two holy places." At the time, Republicans scoff at President Clinton's attempts to take this threat seriously.

Five years ago on this day, yours truly predicted that on this day in the year 2013, the alphabet would go the way of the Morse Code, as all human beings who manage to survive the devastating "Common Cold Plague" have their brains implanted with tiny microchips that allow all twelve of them to be in constant telepathic communication with each other, using Bluetooth technology. Too bad it didn't come to pass.
Posted by Jerky LeBoeuf at 1:00 AM