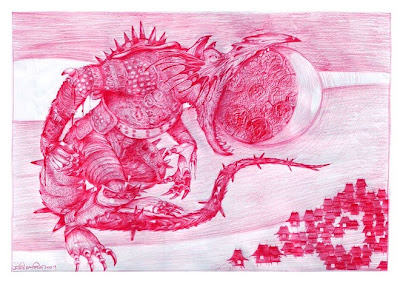 A shitload of funny people were born on this day, including Jonathan Swift (1667) who wrote Gulliver's Travels and suggested the wealthy should eat poor babies in his black satirical masterpiece, A Modest Proposal, Samuel Clemens (1835) who, as Mark Twain, was even better as a political muckraker than he was as a novelist; Sir Winston Churchill (1874), whose rapier wit left his verbal adversaries twitching like bugs in the dust; and, finally, G. Gordon Liddy (1930), the fascistic Watergate felon whose syndicated radio show used to provide more laughs-per-hour than any episode of Saturday Night Live, notwithstanding the fact that he isn't joking.

From this day in 3340 BC, we have the first ever confirmed historical recording of a solar eclipse.

On this day in 1554, "Bloody" Mary Tudor becomes Queen of England and re-instates Roman Catholicism as the state religion. Once installed, Mary promptly gives orders for over three hundred Protestant leaders to be burned at the stake.

On this day in 1936, London's Crystal Palace is destroyed by fire. Who knew crystal could burn?!

Despite the fact that The Beatles had only just split up a few months earlier, George Harrison somehow managed to throw together a triple album of all-new material which was released on this day in 1970. Entitled All Things Must Pass, the record spawned the hit single "My Sweet Lord", which spawned a lawsuit over the similarities between that tune and "He's So Fine (Do Lang Do Lang Do Lang)". Ah, George Harrison... Now, more than ever, "the quiet one."

On this day in 1982, the biggest selling record in history is unleashed upon an unsuspecting world: Michael Jackson's second solo album, Thriller, produced by Quincy Jones.

Operation Desert Storm officially ends on this day in 1995.

On this day in 1999, in Seattle, Washington, The Powers That Be suffer a rude awakening when protests against the WTO meeting by anti-globalization protesters prove to be so intense and forceful that the elite, anti-democratic event's opening ceremonies have to be cancelled. HA-ha! Ever since that game-changing day in Seattle, however, TPTB have ratcheted up the police state tactics and strong-arm rhetoric. Not so HA-ha, that...
Posted by Jerky LeBoeuf at 5:00 AM