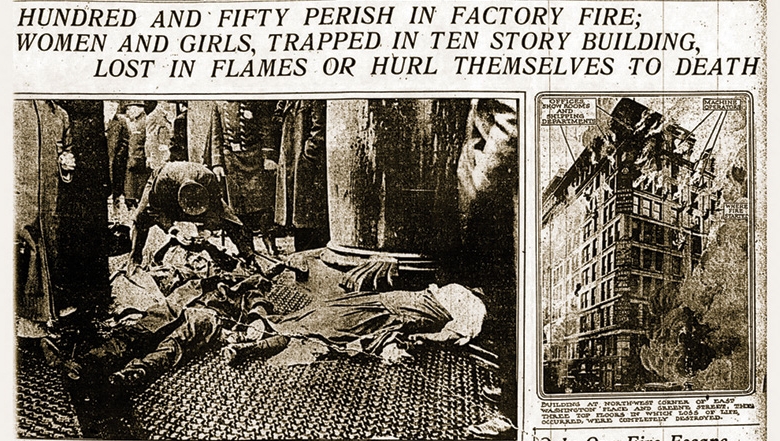 On this day in 1911, a fast-moving fire swept through the Triangle Shirtwaist Company, a garment sweatshop located in New York City's Lower East Side. If any of the hundreds who gathered to watch this drama unfold were in the mood for carnage, they were in luck. Trapped on the ninth and tenth floors behind fire exits that were locked shut by the company, employees - mostly young immigrant women - had two options: either be burned alive or hurl their bodies down to the pavement below.

Sophie Salami and Della Costello were the first to leap, and they did so together, arm in arm. Helpless would-be rescuers watched as a fifteen-year-old girl, chased by flames, crawled out a window and held on for long, screaming minutes. When she finally fell to her death, firemen saw that her hands had roasted through. Three brave laborers in a neighboring building formed a human chain across which a few women were able to crawl to safety. These brave men persevered, but their bodies eventually failed and they, too, fell to their doom.

Sisters, daughters, mothers and grandmothers wrapped rags around their heads - some making the sign of the cross - and jumped. Up to five at a time, sometimes holding hands. Witnesses described the infernal sight of doomed women plummeting, fire streaming back from their hair and dresses, smashing into - and, in some cases, through - the pavement. Shock-frazzled firemen watched, helpless, as girl after girl ripped through their outstretched rescue nets as though they were made out of cobwebs.

By the time it was over, one hundred and forty-six people were dead. Police found 25 charred corpses in the elevator shaft. Another two dozen bodies were found melted against the locked steel door on the ninth floor. Piles of bodies were found huddled together in cloakrooms and hallways. It was, up until that time, one of the worst industrial catastrophes ever.

And why did all those people die? Because the factory owners were worried about their workers using the back way out to steal needles, fabric and supplies.

If you didn't find the above story depressing enough, check out this incredible online resource by Cornell University for more information, including original newspaper reports, photographs, and some powerful editorial cartoons about the fire.

On this day in the year 1993, the FBI give Branch Davidian cult leader David Koresh an ultimatum: at least 10 people must leave the compound by 4 p.m., or some action will be taken. Koresh stands firm. At 4 p.m., armored vehicles scoop away the motorcycles and go-carts that litter the area around the compound.
Posted by Jerky LeBoeuf at 7:30 AM