ON THIS DAY IN PARA-CULTURE, JUNE 1 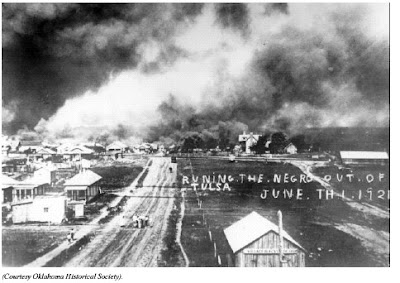 On this day in 1495, friar John Cor brews up the first known batch of scotch whiskey.

On this day in 1921, the Black Wall Street Riot takes place. A prosperous black community in Tulsa, Oklahoma was burned to the ground by a mob of 5,000 white people enraged that a group of armed black men had convened on City Hall to prevent the lynching of a shoe-shine boy accused of raping a white woman (she later reversed her story). At one point, the city called in bi-planes to bomb the community with dynamite, leveling it. Officially, the body-count was 81 - 21 whites, 60 blacks - but estimates have ranged as high as 3000. Many records were destroyed during and after the attack, and efforts are underway to examine abandoned mine-shafts in the area, long-believed to have been used as mass graves for hundreds of unaccounted-for blacks.

On this day in 1979, after 90 years of European rule, Rhodesia holds elections that put Bishop Abel Muzorewa's ZAPU party in power. The nation is promptly re-named Rhodesia-Zimbabwe and Muzorewa builds a power-sharing government with the former ruling whites that lasts all of six or so months, at which point Robert Mugabe's ZANU party wins in a violent, fishy election marred by terrorist intimidation of every other party. Upon gaining power, Mugabe drops the "Rhodesia" entirely, leaving just plain "Zimbabwe". Today, Zimbabwe is one of the only nations on Earth capable of giving North Korea competition as the most totally FUBAR place in the world.

Up until this day in 2001, Nepal's King Birendra was the only Hindu king in the world, a man beloved by his subjects for presiding over that nation's constitutional monarchy with grace, patience, and wit. That all came to a sudden end, however, when his useless, fat-faced son - the sullen Party Boy Prince Dippy, as the press called him - went bonkers, unloading a couple clips of ammo into King Birendra and seven other royal family members, including the Queen and his own brothers and sisters, before turning the gun on himself. In a shocking twist, as he lay in hospital, brain dead, Prince Dippy was crowned King of Nepal in accordance with the laws of the land. Sparing the mountain nation the indignity of having a mass murderer as the head of its royal family, Prince Dippy graciously succumbed to his wounds later that same day. At this point, Gyanendra, brother of slain King Birendra, was crowned King just in time to preside over the funerals of over a half-dozen of his family members.
Posted by Jerky LeBoeuf at 8:49 PM

Email ThisBlogThis!Share to TwitterShare to FacebookShare to Pinterest
Labels: Africa, Media, On This Day, Racism, royalty